An Interview with Chris Harvey

“The main thing that has changed is, the Midwest Team is becoming one of the major “power houses” now. When I raced as a Junior and led the team in 2006 in Houghton, MI, my last year as a junior, we placed really well. We finished 3rd or 4th that year and the year before in Truckee, CA at altitude we finished 5th. When we went back to Truckee, CA in March 2015, we finished 2nd. Driving the Midwest teams improvement is the growth of our clubs; Ashwaubenon Nordic Ski Team (ANST), Endurance United, Lakeland Nordic Ski Team, Loppet Nordic Racing (LNR), and many others. More kids are training for skiing in the fall and even the summer as well. The CXC Camps are getting all of the best kids together and there is more cooperation between the top clubs. With the clubs getting stronger, the region becomes stronger.”

A mission to continue to strengthen the Central Region and specifically the Midwest Junior National Team, starts with feeding the “pipeline” with competitive athletes.

Why should athletes compete in JNQs?
Harvey:

“JNQs are the highest level of competition in the Central Region. These races represent the next step up from high school races. JNQs are like a state meet that includes high school skiers from Minnesota, Wisconsin, Michigan and even college freshman who are still in the U20 age group. These races allow younger athletes to see where they stand against older skiers. An athlete could be a really good 9th or 10th grader but since they are competing against 18 year olds, it really shows athletes where they stand against everyone.”

How do JNQ races differ from high school races?
Harvey:

“The JNQ races are going to be more organized and controlled than a high school conference race or citizen race. The weekends can be quite busy especially for skiers and coaches. For example, registration needs to be completed Tuesday or Wednesday before the races. There are bib pick ups, start times and a lot of races are happening each day because of all the age groups involved. Another difference is the back to back racing Saturday and Sunday. Coaches are working hard because they have to nail the wax for each race for all their athletes. Everyone’s goal is to qualify for Junior Nationals, therefore everyone is competing really hard because not everyone gets to go. First experiences at JNQ racing can be an eye-opener, but the events become less stressful once athletes get the hang of it. JNQ races are there to raise expectations and give athletes a taste of what it is like to ski at a competitive level.”

Are there race opportunities for a U12 and U14 athlete?
Harvey:

“Absolutely! During the 2014-2015 season, CXC added another element of competition to allow even younger athletes to get a feel for racing at a higher level, the CXC Youth Cup. All JNQs now have CXC Youth Cup races for the U12 & U14 age group. The CXC Youth Cup offers a shorter, slightly different course from what the juniors race. The point system is very similar to that of the JNQ races as well. There is an over all Youth Cup for the athlete that has the most points at the end of the year. The top 10 U14 boys and top 10 U14 girls can also qualify for a camp in the summer based on their results from the CXC Youth Cup races; the CXC Dream Camp. The CXC Dream Camp was held for the first year this past July in Marquette, MI.”

If an athlete wants to compete in JNQ or CXC Youth Cup races, what type of membership do they need?
Harvey:

“The way the membership is organized this year is a nice change, because it is going to make things very straight forwards in terms of what membership athletes need to have. Athletes get both a CXC Membership and USSA membership this year, it’s not one or the other.

“Having the memberships this way reduced the cost of putting on the races which everyone can appreciate.” How does the point system work for JNQ races?
Harvey:

What is the Qualifying Criteria to make the Midwest Junior National Team?
Harvey:
The qualifying criteria is:

There is now an additional trip for U16 athletes who do not qualify for the Midwest Junior National Team to participate in, can you explain this trip?
Harvey:

“The past four years, there has been an additional trip added for U16 athletes to qualify for, if they don’t qualify for the Midwest Junior National Team. If an athlete was not in the top 8 of the U16’s, the next four athletes qualify for the New England Nordic Ski Association (NENSA) U16 Trip out East. The U16 NENSA trip is not a second tier trip at that age group. The NENSA trip brings together the best U16 athletes in New England and has been a fantastic development trip. Getting the opportunity to travel and compete with some of the best U16 athletes in our region along with top skiers from Vermont, Maine, New Hampshire, and New York, essentially becomes just like Junior Nationals but is a little more laid back, it is a shorter trip (2 days of racing) and costs less.
We’ve seen kids who don’t make the Midwest team and go on the NENSA trip and come back and work hard over the spring and summer and a lot of those kids have gone on to make the Midwest team the following year or even World Juniors. For example, Ian Torchia a skier at NMU currently, did not make the Midwest team as a junior and went on the NENSA trip. Ian loved the trip and really got into skiing after that. Eventually he became the top American distance skier at World Juniors in Kazakhstan this past January. He is not the only example, there have been many other skiers who have become successful in their results after the NENSA trip that helped them progress.”

With the JNQ race season fast approaching, and the Junior National Championships on home turf in Cable, WI at Mt. Telemark in March 2016, Harvey has big goals for the Midwest Team this year; claiming the Alaska Cup, for the first time since 1997.

“Telemark is a fantastically challenging 5K course and I know with the experience of racing on it last year and the year before, we are very excited to host the other regions. We are also excited to see their faces after their first climb of Mt. Telemark. The Midwest Team has been getting closer to New England’s points and with a home course advantage and having all the top skiers qualify for JNs, I think we have a shot at winning the Alaska Cup.”

Harvey’s vision for the Midwest Team also reflects a more in-depth explanation for his goal this year.

“In the future we want to keep the pipeline full of Midwest athletes competing at Senior Nationals and qualifying for International Trips. Having been shut out in the past, it was wonderful to have athletes qualify last year for these events. Keeping the strong momentum of our clubs and coaches going will help us develop a deep talented team year after year. Overall, having the entire Midwest region involved and pulling towards this goal is a key to success.” 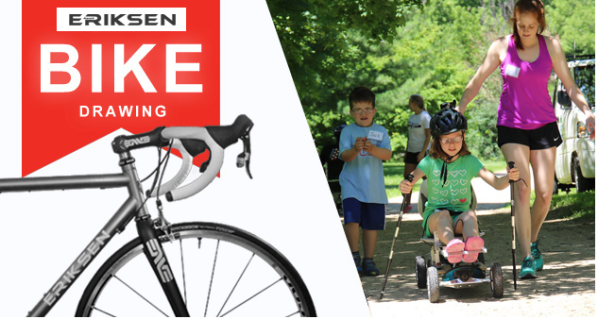 We have reached 37% of our goal of selling 200 tickets by October 3rd for the Annual Eriksen Bike Drawing. Help support CXC’s Adaptive Program for children with physical disabilities and visual impairments with your ticket purchase.

Mary Kozloski is CXC’s Communication and Media Coordinator. Mary has a Bachelors degree from the University of Wisconsin-Green Bay where she majored in Public Relations with a minor in Business Administration, competed as a member of UW-Grean Bay Nordic Ski Team and was team captain for two years. Feel free to contact her at mary.kozloski@cxcskiing.org